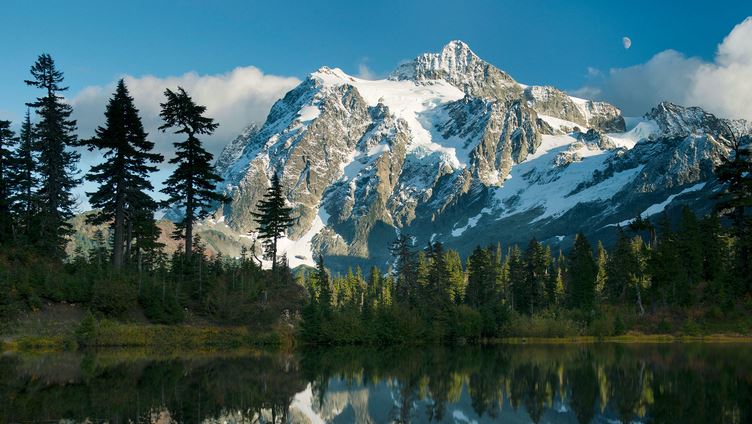 Prices change daily so call our expert team on 01159 610590
today for our best availability and deals.

One of our longest suggested itineraries, taking you through Washington State, Idaho and Oregon. There are a lot of miles here; you will want to stay more than the one night in several locations, it’s spectacular and you will want to linger…

Remember that the earlier you book, the cheaper rental will be and the higher likelihood of securing the vehicle you would like.

Collect your motorhome and head north on Interstate 5 to Mount Vernon, just over forty miles with most on the Interstate to a campground where you will acclimatise to your vehicle and how to hook up to electricity and water.

★ George Washington, Commander-in-Chief of American forces in the Revolutionary War and the first resident of the United States, called Mount Vernon home for more than 40 years.Visit George Washington’s Mount Vernon Estate, Museum and Gardens which is now the most popular historic estate in America.

Though only 65 miles, your journey will take a while as it will be through some very scenic locations as you head toward the North Cascades National Park. You will be following the Skagit River as you pass through small towns such as Lyman, Hamilton and Concrete – the latter being worth a stop as it really was ‘cement city’! Though many of the original wooden building of the early 1900’s were destroyed by fire, three still remain. Continue through Rockport and Marblemount and enter the North Cascades National Park. On your left you will see Damnation Peak, Mount Despair, Mount Terror and thankfully, Mount Triumph! To your right, Pyramid Peak and Colonial Peak. Overnight in the National Park.

Continue through North Cascades National Park, dropping down through the Okanagan National Forest to Electric City. The attraction here is the Grand Coulee Dam. This is the largest electricity production facility in the USA – fifth in the world – and is the largest concrete structure too. There is enough concrete in the Grand Coulee Dam to build a 60 foot wide road, four inches thick, from Los Angeles to New York City! That would be a four lane highway, 3,000 miles long.

★ Visit the Grand Coulee Visitors Centre. On summer evenings, a laser light show, including full size images of battleships and the Statue of Liberty, is projected onto the dam’s wall

As you head for fabulous Coeur D’Alene in Idaho, after about 90 miles your drive takes you through Spokane, Washington. We’re sure you’ll want to stop so please look at their website to see what you might want to do there – wineries being a ‘big thing’.

You have plenty of time to linger as there is only another thirty miles before reaching tonight’s campground. Blackwell Island RV Park is located right on the water with full hookups and drive-thru convenience. Sit on the beach or take a dip in the lake. Coeur d’Alene offers a wide range of indoor and outdoor activities. Within Kootenai County there are 87 parks and campgrounds, 47 hiking trails, fishing, swimming, hiking, world class golf, horseback riding, tennis, amusement parks, and, of course, spectacular scenery at every turn. You may want to stay longer than just one night!

Only about four hours drive if you stayed on the Interstate but you’d miss so much if you did. After completing your crossing of that sliver of Idaho, your route takes you into Montana: Big Sky country. Your campground is located in the great outdoors of Southwest Montana, nestled in the Rocky Mountains near the historic cities of Anaconda and Butte and surrounded by Forest Service and wilderness experiences. Butte was known as the ‘Richest Hill on Earth’ for first gold, then silver, copper, lead and zinc have all been mined here. The historic district is well worth a visit.

★ Visit Missoula for Fort Missoula, the University of Montana and the Elk Foundation

South-east towards Yellowstone National Park. You should leave the Interstate at Belgrade and head south on the scenic Route 191, through the Gallatin National Forest and past the Big Sky Resort. You’ll enter through the West Entrance and, if you’ve got time, Yellowstone is definitely the place to spend that extra day, or even longer. Most of the major and iconic sites are on a loop. It’s under a hundred miles round but, traffic jams around here are caused not by visitors but whenever the local wildlife decide to walk, sit or lie close to or even on the road. You’ll not move a buffalo and, if you’re lucky enough to find it’s a bear or a moose up ahead, you’ll want to stop just as everyone else will. Coming in from the West and heading out to the South means that, whichever way round you choose, there will be a section you drive twice. In this case it’s the road by Fountain Paintpot and Old Faithful so it’s no hardship. There are several campsites on the loop as well as near the entrances. The website has all the information.

all within Yellowstone National Park

As you leave Yellowstone by the South Entrance you’ll enter Grand Teton National Park. It’s because they’re so ‘young’ that those magnificent mountains rise directly from the Jackson Lake valley without foothills. It’s easy to see how they got their name from French speaking trappers. Stay on Route 89 and by the Idaho border, bear westbound for Idaho Falls.

★ Visit the top year round resort of Jackson. It’s home to celebrities and visiting ‘beautiful people’

A great deal has changed for the first Americans over centuries, but a great deal has remained the same. The Shoshone and Bannock tribes were granted 1.8 million acres in Eastern Idaho under the Fort Bridger Treaty of 1868. Survey errors, treaties, and promises both kept and broken moved the boundaries of the tribal lands to as little as 418 thousand acres and back to their present area of almost 544 thousand acres. As you drive south on Hwy 15 today, you will pass through the Fort Hall Indian Reservations.

A ‘must see’ is a collection of Native American art and artefacts at an unusual shop called The Clothes Horse. Over generations the Shoshone Bannock tribes have developed a particular style and quality which is considered world class, some of their pieces are even on display at the Smithsonian in Washington D.C. .Turn off on Hwy 86 towards American Falls. During high water flows you’ll see a torrent of water spilling over the falls that originally gave the city its name.

Situated on the Snake River, just off Interstate 86, exit 28, Massacre Rocks State Park is open year round and covers approximately 1,000 acres. Rich in history, as wheel ruts from wagons on the Oregon Trail still show, pioneers used this area as a rest stop for years. Many emigrant names are inscribed on Register Rock which is now protected by a weather shelter. The State Park campsite is home for tonight.

Just over 200 miles or three hours will bring you to Idaho’s State Capital today. At first you’ll be following the Snake River on your right; then on your left. The freeway continues to Boise but you might want to turn off just after Glens Ferry and continue through the Snake River Birds of Prey Natural Area, re-joining the freeway just north of Meridian where you will have to head south for a couple of miles to reach your campground just outside of Boise.

★ Visit the glittering cascades at Thousand Springs, just past Twin Falls and then Bruneau Dunes south of Mountain Home

Heading west back towards the Pacific Ocean your route soon takes you into the state of Oregon. The suggested overnight stop is near the town of Le Grande which was the phrase an early French settler used to describe this area’s beauty. Dominated by Mount Emily, the vast area you’ll drive through is the Wallowa-Whitman National Forest.

★ Visit Baker City for the primary visitor centre and interpretive museums along the historic Oregon Trail resort of Jackson. Its home to celebrities and visiting ‘beautiful people’

Much of the drive today will be alongside the mighty Columbia River which separates Oregon from the state of Washington on its northern bank. You should break your journey first at Pendleton for the fine local woollen goods and then at Fort Dalles which originated as a US Army outpost deep in ‘Indian Country’ and on the Oregon Trail. The name, in Canadian French, refers to the very strong rapids just outside the town. Maybe you’ve heard that the city of Portland, Oregon, has been named by ‘Money’ magazine as North America’s “Best Big City”. One visit will explain why. The gardens, museums, zoo and fine dining will maybe be a welcome contrast to the outdoors life of the last few days. Much can be accessed via the region’s convenient and eco-friendly light rail system. We are recommending the Portland Fairview RV Park in a peaceful setting just eight miles east of downtown.

Having enjoyed the city, it’s off once again to a National Park – your last before sadly returning to Everett. After seventy or so freeway miles, turn off on Route 12 toward the park. Mount St Helens rises on your right and, in fact, you may be tempted to come off the freeway and ‘cut the corner’ by driving right past the Mount St Helens National Volcanic Monument. It’s three miles shorter but will take a lot longer due to the windy roads. Mount Rainier National Park was established in 1899. Elevations range from 1,610′ to 14,410′ above sea level and the ‘mountain’ is actually an active volcano encased in over 35 square miles of snow and ice, surrounded by old growth forest and stunning wildflower meadows. There are three or four Forest Service  campgrounds to choose from on Routes 12 and 410. Take a look at the appropriate websites to find one you like.

★ Visit the seven areas of the park – or as many as you can. Each has trailheads and facilities; some more rustic than others.

✪ 110 miles to Everett to drop off your motorhome.

For ease and comfort on this itinerary we would recommend you purchase the Early Bird Departure Special which allows you to return up to 3pm. It’s not a long drive back but being relaxed is the key to ending a great holiday!