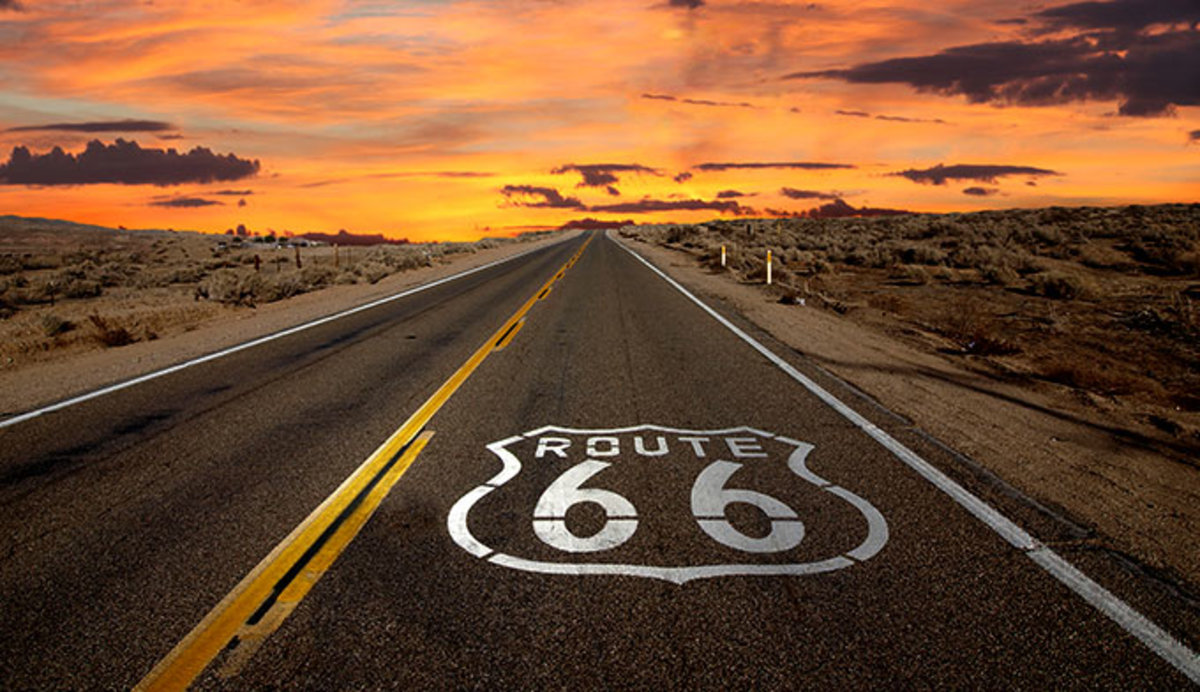 Route 66 is legendary. Since 1926, it has provided the way for travellers to follow their dreams. No other highway has been immortalised in song, prose, and film.

This motorhome tour involves driving on Freeways and stopping at places where the old road still exists. As there is so much to see and do along Route 66 you may wish to extend this trip with additional days in some locations.

180 miles on Interstate 55 and you will very soon get used to driving your motorhome. Headed for Springfield, Illinois’ State Capital, you’ll get your first sight of Route 66 there. Pay your respects at Lincoln’s Tomb & visit the New Salem State Historic Site where costumed guides re-create the 1830s town where the future president lived and worked. We suggest you stay southeast of the city, at the Springfield KOA.  Don’t leave without getting your kicks on Route 66! You’ll find a museum, shops, motorcycle races, antique car rallies and a drive-in diner.

Cross the Mississippi River east of St Louis. The state line is in the middle of the river so you are leaving Illinois and crossing into Missouri. Head for West St Louis and the town of Eureka for tonight’s suggested campground, the St Louis West KOA located right on Historic Route 66.

Also in Eureka is Six Flags St. Louis with its thrilling roller coasters, high-speed thrills, family rides and even gentle rides for the little ones.

Stop off at Lone Elk Park, a 546-acre wildlife management area serving as a preserve for bison, wild turkey, waterfowl, elk, and deer. Ten miles further on, stop at the Route 66 State Park. Opened in 1999, the park is a well known stopping point for all Route 66 travellers.

Then move on to your overnight destination. We suggest the Springfield/Route 66 KOA.

Before you cross the Missouri/Oklahoma state line, visit the town of Joplin. Those famous pictures of Bonnie and Clyde, with pistol and cigar, were left behind here when the duo had to leave town in a hurry.

Continue heading southwest and divert to Tulsa, the one time ‘Oil Capital of the World’ where Gene Pitney was ‘Only 24 hours’ from. Here too is the world’s largest, most comprehensive collection of art and artefacts of the American West. Due south of Tulsa come off the freeway on Route 75 and join up with Interstate 40, heading for Oklahoma City, and at Okemah, find our suggested campground, the Oklahoma East KOA.

A long drive but worth it as you head west through Oklahoma and into Texas “On the way to Amarillo”!  One overnight suggestion would be Amarillo’s KOA, just off historic Route 66.

Wander the famous highway to see local attractions such as the Cadillac Ranch; the American Quarter Horse Heritage Center & Museum and the Route 66 historic district featuring antiques, boutiques and dining.

Drive to the bottom of Palo Duro Canyon, the second-largest canyon in the USA and one of the nation’s most magnificent scenic attractions. Travel the trails used by the Apache, Comanche, buffalo hunters, and early Spanish explorers. You may prefer to overnight at Palo Duro Canyon Sate Park.

After 130 miles enter New Mexico…. and America’s Southwest.  Just a few miles further on, arrive at Tucumcari and the Cactus RV Park which we suggest is a good stop on your way to Albuquerque.

Drive south of the Santa Fe National Forest on the way to Albuquerque where we suggest you stay at the Enchanted Trails RV Park and Trading Post. On Historic Route 66, Enchanted Trails is flanked by three extinct volcanoes. The campground sits on a high desert mesa overlooking the city of Albuquerque. Originally a Trading Post built in the late 1940s the flat roofed adobe building is typical of the region. The property has been used as a backdrop for several films. Recently their vintage cars and travel trailers were featured in a Route 66 video.

Headed for Arizona, you will pass through the town of Gallup, an interesting town which some say is the ‘Indian Capital of the World’ because of its location in the centre of Native American Lands. Just west of Gallup you will cross into Arizona and overnight in Flagstaff, gateway to the Grand Canyon. We suggest you overnight in the KOA at Flagstaff.

You cannot come all this way and NOT visit the Grand Canyon! You’ve had some long drives and this is the chance to have an easy day. Try and pre-arrange a flightseeing trip for this afternoon and don’t forget to be in bed early so you can be up for sunrise.

We suggest the Mather Campground. It has no electric or water hookups but it does have fine shower and toilet facilities.

Up for the sunrise and make for Seligman, a Route 66 town all the way. Here you can come off the Interstate and drive for several miles on the original Route 66. Seligman is a delightful town and retains all the flavour of the old road. A trip down Route 66 is a trip back in time to the days when Route 66 really was Main Street USA. At the ‘end’ of Route 66 you will arrive in Kingman and we suggest an overnight stop at the Kingman KOA.

Come off I-40 and take a look at the Mojave National Preserve.

Natural features include the Kelso Dunes, the Marl Mountains and the Cima Dome, as well as volcanic formations such as Hole-in-the-Wall and the Cinder Cone Lava Beds. The preserve encloses Providence Mountains State Recreation Area and Mitchell Caverns Natural Preserve, which are both managed by the California Department of Parks and Recreation. Impressive Joshua Tree forests cover parts of the preserve. We suggest you overnight at the KOA at Barstow. This is an interesting town that is home to many museums: Mojave River Valley Museum, Route 66 Mother Road Museum, the Western America Rail Museum, and the Desert Discovery Center.

A few miles to cover this morning before returning your motorhome.