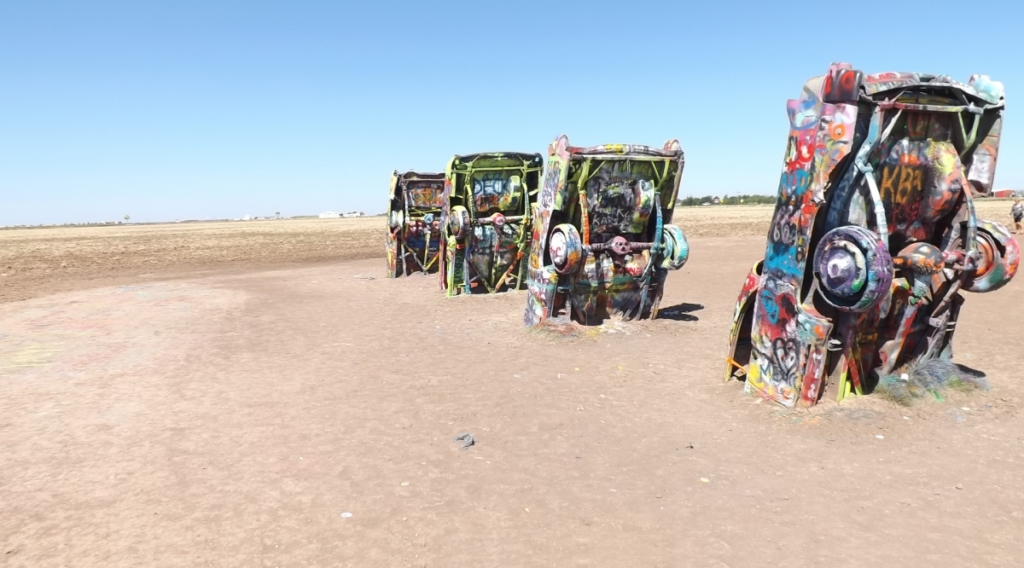 Our client Sue Wright has written a Route 66 blog detailing her day to day movements on her Route 66 holiday booked through Complete North America. You can read Part 1 here and Part 3 here

Now were where we? Oh yes Oklahoma.

I can hear you all singing ‘we’re on our way to Amarillo’.

The 1st stop is at the Cherokee Trading post, it’s full of hand made jewellery and trinkets, beadwork and statues. As I’m wondering round I’m suddenly aware that Steve has disappeared. Not to worry time to buy some prezzies without him saying ‘do you really need that?’ Silly man, of course I do. I wonder outside and there he is….eyeing up a couple of old Apache trucks one with a camper on the back… Oh Oh… ‘Can you go and see if they’re for sale’ he asks. As I walk back into the trading post I’m saying my usual mantra in my head…please no, please no. Well my prayer answered they’re not for sale so in my usual disappointed voice I say ‘what a shame, they don’t want to sell them’. Phew!!!

Back on Route 66 which, among all the other names, is known as The Will Rogers Hwy we come across Lucille’s garage no longer trading but well maintained for the nostalgia. We travelled all morning taking in all the sites and atmosphere of days gone by. Looking at all the derelict buildings that once were homes, businesses and even whole communities. It really is sad that the highway did this to such little towns. Suddenly among all the dereliction you are aware that one house is still occupied, how lonely it must be.

The landscape is amazing, dry plains then suddenly rocky mountains shooting up out of nowhere. Your mind starts to wonder back to the old western movies. We’re just two lonely cowboys crossing this vast land. Is that a row on Indians I can see along the top of that mountain?

By early afternoon we reach Texola, so named because it is right on the boarder of Oklahoma and Texas and nobody could decide which State it belonged to. It is an inhabited Ghost town with 1 café, the Tumbleweed & Waterhole, so lunch it was. Another brilliant original place with a local artists work for sale. He intricately etches old dried out cow skulls that are awesome, just a shame I wouldn’t be able to get one home.

After lunch and chatting with the owner who, when travelling R66 with her husband their vehicle broke down in Texola 6 years ago and they decided to stay, we head into Texas to the town of Shamrock and the Dew Drop Inn made famous by the Pixar Cars movie. It is the café in the film and easily recognizable.

We’re nearly at Amarillo now and there it is The BIG Texan. The motel is set up like an old western town and each supposed shop is a motel room and across the square is the restaurant and bar. It’s an eye popping place with Barn Stars and Buffalo heads everywhere. This is where the 72oz steak challenge takes place. You have 1hr to eat a 72oz steak, shrimp, coleslaw, fries and Texan toast. Steve was up for it and had been practising every night. When he saw were he’d have to sit and how everybody crowds round to watch Steve, being shy, couldn’t do it. He asked if he could buy one anyway and eat at a normal table but they wouldn’t let him, spoil sports. He ordered the biggest steak they had, 36oz, with all the trimmings. The waiter and some people on our table were shocked when he ate the lot in 20 mins and asked for more bread!!! That’s my man. Off to the bar for some beers then hit the sack.

New Mexico is known as The Land of Enchantment.

We drive a short distance and there is Cadillac Ranch. This, as many of you know, is a row of Cadillacs in the desert with their noses buried in the ground at a slight angle. They stand majestic with names all over them put on by all the visitors and we wrote ours. It feels almost like standing at some great memorial for some long past heroes and in a way I suppose it is. On to Vega and the Magnolia Gas Station then to Adrian and the famous Midpoint Café. We’ve travelled half Route 66 and it’s time for a piece of their Ugly Crust Pie. The original owner of this café now runs a little gift store next door that used to be a gas station and has an old pickup outside covered in names. She explained how people travelling the Route would ask were Cadillac Ranch was. When she told them they’d passed it they were disappointed so she lets them sign her truck and unlike Cadillac Ranch the names are never removed, she also has an old Impala that she still uses daily.

We travel on and R66 disappears to mud track and reappears again so you’re on and off it till you arrive in Tucumcari. This is almost a Ghost town in the winter but has the most neon lights and original motels for such a small place. There are classic cars and murals all over the town. The motel we stayed in is were Elvis Presley stayed arriving in a ’59 Caddy and there’s a mural on the wall by the office depicting this.

There are lots of fascinating little places and murals to see here.

We set off early along the infamous Hwy 40, this is the Hwy that caused the demise of R66, we then turn onto Route 66 at Santa Rosa to get breakfast. Having more than satisfied our stomachs we notice a car museum over the road and sat on the forecourt is Mater from Cars!! We mosey around and there’s some really nice cars…I’ve chosen mine, an old Camaro and Steve…well he’s spoilt for choice though he did fancy the California Kid car. Thanks goodness they’re not for sale. Travelling on we spot The Comet 11 (2) café and lots of other travel guild places. It’s like driving through the books and brochures that we had looked at before we came.

We arrive in Santa Fe early evening having stopped and started along the way for 7 hours. Tired we grab a meal next to the hotel and decide to turn in early as we had lots to see tomorrow.

Off the short distance to find the Old Town, what a step back in time this is. It’s Spanish/Mexican full of Churches, quaint shops and cafes set in front of a snow topped mountain. Did I mention the coffee and pastries we just had to try as our noses drew us into one of these fascinating patisseries? We wondered around looking in so many places in the warm sun purchasing souvenirs. Suddenly it went really cold and it started to SNOW, ten mins later and the sun came out again. Apparently you can get a freak cloud that passes over the snow top, sucks in the snow then as it moves over the warmer air it dumps it….weird but an experience. We drove back to new Santa Fe stopping along the way. Another interesting day and very tired.

I can hear you singing again.

We’re off down the Turquoise Trail a winding narrow mountain pass that takes you to Albuquerque past interesting towns. The 1st of these is Cerrillos that boasts a museum, church, bar and opera house. Now you’re imagining fancy buildings, Oh no cast your mind back to those old western movies again. We were half expecting a shoot out to take place. It’s almost deserted with dust roads and even dustier buildings.

Next on to Madrid where they filmed Wild Hogs (a great movie and very funny). This was more commercial but still basically a dust town. We spent a couple of hours here having coffee and, yes pastries, in the Java House and eves dropping on the locals as well as perusing the tourist shops and Maggie’s (Wild Hogs). I discovered that Turquoise didn’t have to be turquoise, there are many varieties and the one that attracted me was known as Buffalo, it’s actually white and black, I had to have some of that!! We cruise on down the trail till, late afternoon, we reach Albuquerque. Relaxation is the order for the rest of that day.

"Lobo Theater on Central Avenue" ~~~~~~~~~~~~~~~~~~~~~~~~~~~~~~~~ On a trip back to my old stomping grounds in college, I checked out nearby hangouts. Up the street from the University of New Mexico is the Lobo Theater. This was an eclectic hangout for the students in Albuquerque. I remember watching a midnight screening of the Rocky Horror Picture Show here. Good times and memories.

We head into Old Town Albuquerque which is very much like Santa Fe but even more laid back and there’s a beautiful Plaza with a church surrounded by shops that used to be houses. More mooching and snacking is called for. By early afternoon we decide to take a cruise down R66 as we would be hitting Hwy 40 a little way tomorrow. There’s a couple of pawn shops that we decide to look in and that’s were Steve buys me a couple of Silver Navajo bracelets with Buffalo turquoise set in them. Said I was having some didn’t I. Another tiring day so we eat in a little diner and bed.

Known as The Gateway to Indian Country. Onto Hwy 40 for a short while before we can get onto a driveable part of R66. We pass though many ghost towns and the usual arid plains and mountains. Spotting Navajo ponies we stop to stretch our legs…it’s silent and deserted, again you get that feeling of what a privilege it is to be able to travel this great road, a homage to a simpler life. Travel a few miles and spot an old truck in a field at the side of the Route. As I get out the car to get a photo I see a guy, ‘Howdy’ I call and he wonders over. ‘Is it Ok to take a photo?’ He’s a friendly guy and I explain my husband, sat in the car, is well into these old trucks and has restored quite a few. He explains that’s what he likes to do and why not come into his workshop and see what he’s got going on. Steve jumps at the chance. His name was Terry and his father had been the local preacher. He’d lived there all his life and his workshop was actually the old preaching hall. An hour or so was passed chatting about trucks and life before we set on our way again.

We drive over the bridge into Gallup and see the El Rancho, an old preserved 1930’s hotel were all the movie stars used to stay. The main street is bustling, full of trading posts and neon signs, its early afternoon so lunch in the Railway Cafe before hitting the streets. We go in and out of many shops that run opposite the Santa Fe Rail line. Steve buys me a Navajo silver pendant with Buffalo in to match my bracelets. There wasn’t one that really caught my eye so the silversmith asked what I was looking for. I explained the bracelets and how I wanted something with a Navajo design. After discussing this he made me a one off special!! By about 5pm we were getting weary so make our way to the motel. We’re pleased to see it has a steak house and bar inside so decide to stay in tonight and have a few jars.

We’re really looking forward to the trip through the Four Corners Region and Arizona.

If you’ve been inspired by Sue’s wonderful blog, have a look at our selection of Route 66 holidays here. From a 14-21 night fly drive to experiencing the Mother Road by Motorhome, we’ve got you covered!