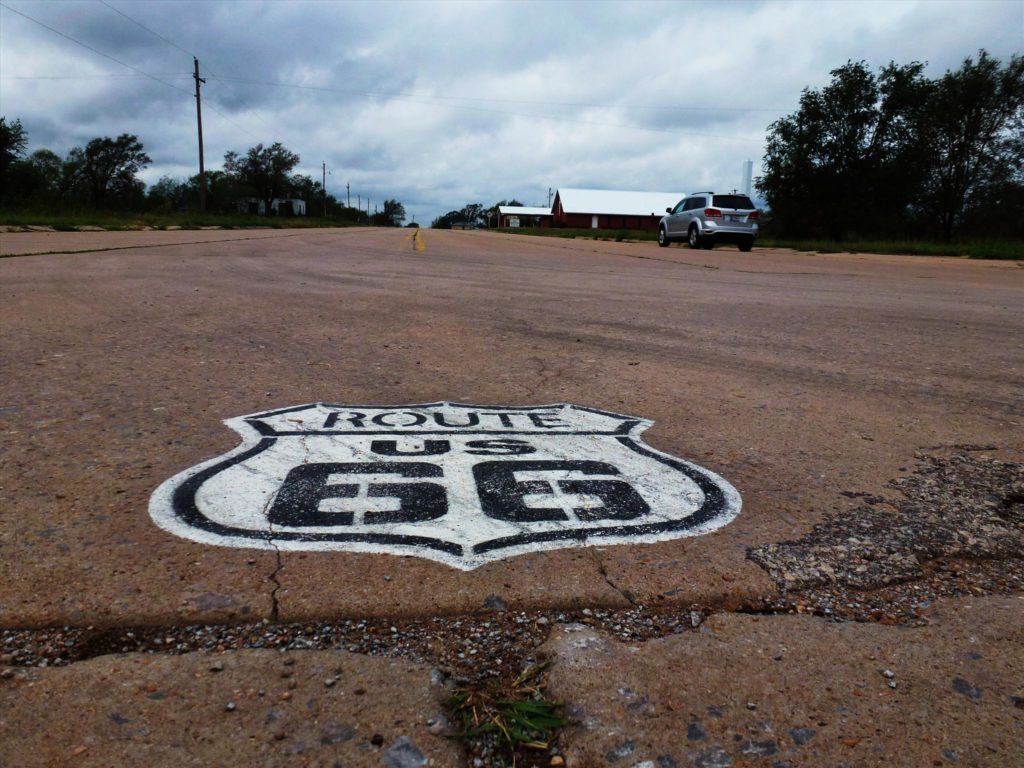 Our client Sue Wright has written a Route 66 blog detailing her day to day movements on her Route 66 holiday booked through Complete North America. You can read Part 2 here and Part 3 here

For years something we’ve always wanted to do is travel Route 66 something a lot of us Yank car nuts dream of. Travelling along, radio on and dreaming of what it was like way back when.

My 60th birthday was approaching and what better present could I have than making a dream come true.

Should we travel East-West or West-East? Should we do all of it? Finally it was settled, if you’re going to do it, do it the way it was meant to be done… East to West, beginning to end.

So after a lot of planning and Steve with his usual War Cry of HOW MUCH?? It was all settled and booked.

Route 66 was opened in November 1926 but realigned in 1932 and then in the 40’s/50’s the freeways started and the demise of R66 was inevitable. So when you travel The Road you weave on and off and running along the side are remnants of the 1926 R66 some of which is just about usable. We tried to stay as true to the route as we could in the time we had, 3 weeks, also deciding we would eat in original old diners/cafes when ever we could and stay in original motels/hotels. We wanted to feel the Route.

After a great flight we arrive feeling fresh and rested. We’d decided we didn’t need a car for the 1st couple of days so grabbed a cab into the Windy City.

Interesting point is it’s not named the windy city cos it’s windy. It got its name from being a place politicians used to gather for meetings and spout a lot of hot air.

On arriving at the Four Seasons Sheraton in the centre of the city we were greeted with the 1st of our parcels that contained car parts. Most of you know by now, and a lot of you do it yourselves, that when you go to USA this is an opportunity to get parts for your projects back home.

Bags dropped in our room and off for a walk to Lake Michigan and pick up some donuts on the way back…tired we head back time to sleep.

Summer in Chicago at the Playpen

Up early and walked the Magnificent Mile down to Oak Beach on Lake Michigan. This passes all the ‘posh’ shops, Tiffany’s, Bloomingdales, and Macy’s… It’s a strange mix of new and old. The sky scrapers dwarfing a lot of old interesting buildings the most interesting comparison being the old and new water tower.

The beach is beautiful and being Saturday there’s lots of joggers enjoying the sun. We walked along the beach to Navy Pier. It is not a pier in the normal sense. It is a man made piece of land that juts out into the lake in the design of a pier. It used to be a Navel training base. There’s so much to see there. Fun fair, Crystal garden, boating trips, dance hall, festival hall, shops and stalls, museum collections, restaurants galore and loads of entertainment going on.

After looking round and having lunch we went on a boat trip round the lakes West edge to view the famous sky line of Chicago after which a huge ice cream was the order of the day.

The start of Route 66 is just by here and we catch our 1st glimpse although it is actually buried under the new road there is a sign.

We walked back to the Hotel, my feet aren’t too good, I was in agony after being on them for so long and walking so far. On arriving back at the hotel it was coffee and pain killers and rest up ready for tonight. Out for the obligatory huge meal then on to Red Heads Blues Bar.

Totally exhausted we head back to the hotel to sleep ready for the adventure to begin.

Up early again and we’re off to collect the car…the adventure begins. After finally finding my way we’re on Route 66 and looking out for iconic landmarks. The 1st is the 30ft Gemini Giant in Wilmington followed by an old Texaco gas station in Dwight opened in 1933 and cleverly closing in 1999 not only to make it the longest serving gas station on R66 but also to run for 66 years. The Standard gas station in Odell is next, so we pull over and take a look. Of cause you’ve got to buy a R66 patch and tag….it’s the law!!

Lunch time and we see ‘The Polka Dot’ diner in Braidwood that is totally original and still operating.

We are greeted outside by life size models of Elvis, Marilyn Monroe, James Dean and Betty Boop but when you walk inside the neon signs, chequered floor and juke box hit you like a Back to the Future moment…wow time for a shake and float.

On to Pontiac, an old mining town. On the courthouse green there is a statue of an Ottawa chief, Pontiac, whose image graced the General Motors marquees. The Route 66 Hall of Fame museum is in the old fire station and filled with everything R66 and automotive. What a pretty town it is with murals everywhere done by Bob Waldmire who travelled the route doing them and living in an old Chevy schoolbus. When he got too old to travel he settled in Pontiac and converted his bus to a home that is still parked there. As you walk down an alleyway you see a row of shops in front of you with people standing by them but when you get closer you realise they’re actually murals. They are amazing.

The route goes on and we see the Hot Dog Giant and then another garage/workshop. After 8hrs we finally arrive in Springfield and the Route 66 Hotel, what a place, a survivor from yesteryear with old cars and fuel pumps outside. As you walk in you think you’ve entered a museum, the foyer and hallways are full of cars, signs and gas pumps. Did we just step back in time? Time for food and an early night ready for more tomorrow.

Up and off travelling on as much of R66 as we can calling at the famous Shea garage run for 50 years by Bill Shea. On we go taking in all the sights and sounds of the road. Parts are as you would imagine but some seem almost sacred. You feel like you’re the only ones to have travelled this road since the 40’s even though you know thousands travel it every year. It’s so quiet and eerie, in parts your imagination takes you back and you see so many things you’ve read about in books and brochures.

Stop at the Crossroads Diner, another survivor for more ‘just like Momma made it’ food.

On the way again and we were held up at a railroad crossing by a train with about 300 boxcars. At the side of the crossing is the Luna Café an old hang out of Al Capone’s. It used to be a Speak Easy and Brothel. Now a seedy bar.

Pass by the Chain of Rocks Bridge over the Mississippi river to St. Louis. Tonight Steve ate 50 chicken wings and fries!!! In training for the 72oz Steak challenge.

It's been real #stlouis Had a great time this week, finally got up to the top of the arch today. Swipe to see the view.

Drove along R66 to The Gateway Arch, completed in 1965 and made in shining stainless steel. Went to the top, 630ft…what a view. This arch represents the East crossing to the West journey. Then the search for Ted Drew’s Frozen Custard Parlour opened in 1941…found it. Long queues and no wonder. It’s a frozen cream & egg custard concoction so thick you can turn it upside down and there’s about 100 different ways and flavours…YUMMY.

Going to Springfield via Cuba and Lebanon, yes still in USA. Cuba was a great city, real old R66. This is where the tallest man in the world had his shoes made and we saw a pair of those….BIG. It is also known as mural city because of Bob Waldmires many pieces. Little way down the road we stopped at Lone Star antiques, full of great keepsakes so got a few things. Saw the Giant Rocking Chair at Fanning, more than 42ft tall and 20ft wide, then on to St James in time for lunch at Diane’s Diner. Across the road is a gun and western shop so decided to mosey on over and so glad we did. It was a local meeting place with pool table, pawn shop and gift shop all rolled into 1. Bought lots of items and even persuaded the owner to sell me a Barn Star that wasn’t for sale…result. He was a great character. Finally we arrived at the Route 66 Rail Haven Motel another original with classic cars parked outside. Tea time at Georges Diner and as usual ate too much.

Thanks for going on crazy adventures with me Ash ❤️ #uranusfudgefactory #vaccummuseum

We leave with the threat of snow. Chilly but not too bad and we would be in the car most of today anyway. On the highway to find the tiny corner of Kansas that R66 passes through. Finally find Galena KA almost a ghost town with old vehicles parked everywhere. Called in the museum and chatted to the owners a quaint old couple and very knowledgeable. Get in the car again only to slam on the brakes and shoot across the road only 100yds up it….no not an accident….Steve’s Candy Store. They make it all there and have done since Grand Papas times. Too many to choose from so bought 6 different sorts!! On to Baxter Springs another almost ghost town full of quaint shops were Jesse James robbed a bank and was later shot dead there. It was the site of one of the worst battles of the civil war. Getting hungry and we stop at the Roadside Diner. Had the biggest piece of Coconut Cream pie I’ve ever seen…yum.

I can’t put into words the way you feel as you drive this old legendary road. The sites, smells and atmosphere are mind blowing.

If you’ve been inspired by Sue’s wonderful blog, have a look at our selection of Route 66 holidays here. From a 14-21 night fly drive to experiencing the Mother Road by Motorhome, we’ve got you covered!